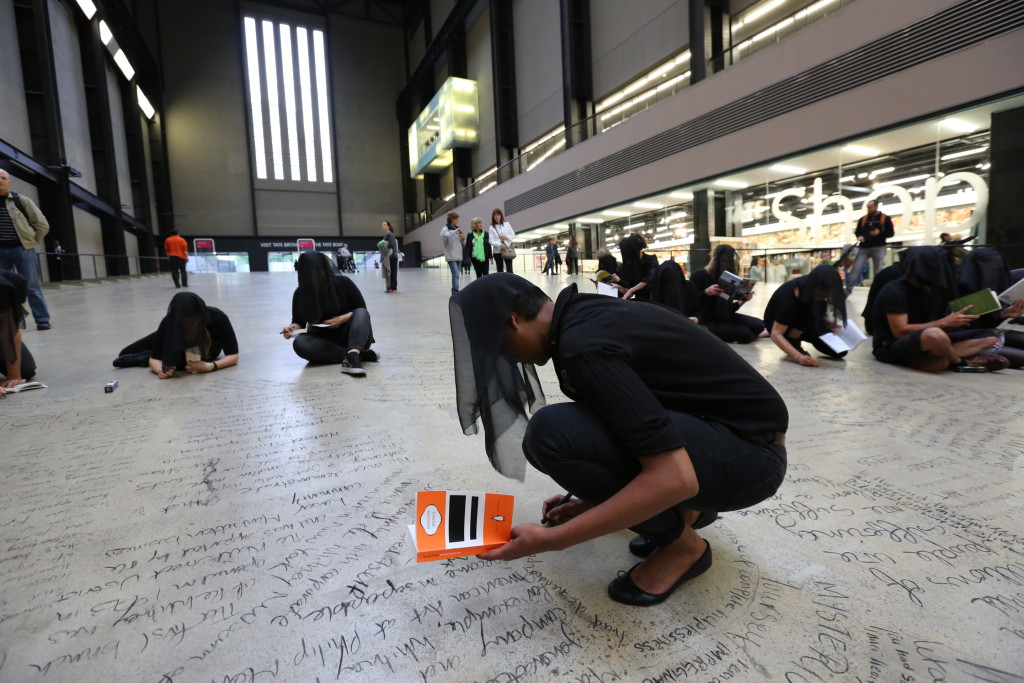 A group of 75 members of art collective Liberate Tate began an unsanctioned performance in the Tate Modern’s Turbine Hall today to urge Tate to drop its sponsorship deal with BP before the Paris Climate Summit in December.

Tate Modern officially closes tonight at 10pm, but the performance, entitled ‘Time Piece’, is intended to carry on throughout the night, ending at high tide on the Thames River tomorrow, at 12.55pm 14 June.

Yasmin De Silva of Liberate Tate said: “Oil companies, like BP, are trying to carry on pretending its business as usual, but time is running out to act on climate change. We’re already seeing the impact of climate change globally, and companies, foundations and institutions around the world are turning away from the fossil fuel industry that’s driving us to climate disaster. We’re here today to let Tate know the tide is rising against its continued support for BP, which has a shocking history of environmental disasters, human rights abuses and lobbying against climate change legislation.”

Performers entered the Tate at high tide, 11.53am today, wearing all black. Then, starting from the bottom of the Turbine Hall slope and slowly moving up to fill the space as the tide rises, performers will take it in turns to transcribe quotes on the concrete floor, aiming to cover 1,000m2. Each performer smuggled in a book to create a library of selected texts [1], including Margate Atwood, Oryx and crake, UNFCCC, 2014 climate report, and Naomi Klein, This changes everything, for use in the performance.

Eva Blackwell of Liberate Tate said: “I’ve been to a number of Tate Turbine Hall installations, but this is the first time I’ve performed in one. This is a textual intervention. We’re filling the Turbine Hall with a tide of ideas and narratives of art, activism, climate change and oil.”

At the bottom of the slope, performers marked out a functional living space, with sleeping and eating compartments and a social media hub to transmit images of the rising waves of words. Performers brought in everything they need to sustain the performance over its 25 hour duration.

‘Time Piece’ is the longest performance attempted by Liberate Tate. It is an intentional escalation of ambition to reflect the increasing pressure on Tate to stop providing BP with a veneer of respectability through sponsorship. More and more institutions have been cutting ties to the fossil fuel industry [2] in the run up to the December Paris Climate Summit, when the world will focus on taking action to tackle climate change.

In March, Tate was forced to reveal the amount of sponsorship money it received from BP was an average of just £224,000 a year between 1990 and 2006 [3], forty times less than it received from Tate Members last year [4]. At the most recent Tate Members AGM Tate members called for Tate to drop BP, and Tate revealed the deal is up for review in 2016 [5].

Tate staff recently brought a motion to end BP sponsorship at Tate and the British Museum, which the PCS Union passed.

Tate’s relationship with BP has been the subject of petitions, artists writing letters to newspapers, Tate Members resigning during the annual Members AGM and a series of protests and performances. Since 2010 Liberate Tate has been carrying out unsolicited performances inside Tate galleries aimed at disrupting the sponsorship relationship between BP and Tate. Read about past performances at liberatetate.org.uk