Tate is Liberated from BP by Liberate Tate

Tate is Liberated from BP
by Liberate Tate 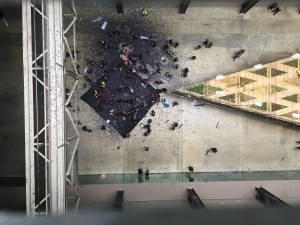 Liberate Tate is an art collective that makes unsanctioned live art in Tate spaces to free Tate from BP. On the 11th March 2016, Tate announced BP sponsorship would end. Today Liberate Tate celebrates this victory for the gallery, the public, artists and the environment and makes the following artists’ statement:

We stayed true to a collective, collaborative artistic practice to create porous, participatory performances that were genuinely confrontational. We honoured artists like the Guerilla Girls, Hans Haacke and Joseph Beuys in our work, and we referenced activist movements like Climate Camp and Occupy in our activities. We were always inside Tate, talking to staff, working with the support of the PCS Union, bringing our questions from the outside world into the heart of the gallery.

BP continues to attempt to mine the tar sands in Canada. BP continues to face legal challenges from Colombian farmers and Louisiana fisherfolk. BP continues to benefit from its associations with the National Portrait Gallery, the Royal Opera House and the British Museum. Our work is not done.

We end with the words of Doreen Massey, who sadly passed away one week ago today, who supported and inspired our work. She wrote these words when Tate Modern was opened in the year 2000: “Within London, Tate Modern marks a new assertiveness. From the restaurant you can stare the city and St. Paul’s more equally in the eye. The challenge is to combine this reborn centrality with a real embeddedness in place – and to preserve within its new-found authority that old ability, on occasions, to cock a snook at the powers that be.” By ejecting BP, Tate has indeed cocked a snook at BP, at the fossil fuel industry, at the British establishment and those in the art world that hold back progress.

We look forward to seeing galleries and museums around the world follow this lead in the months and years to come. For a fossil free culture! Free art from oil!”