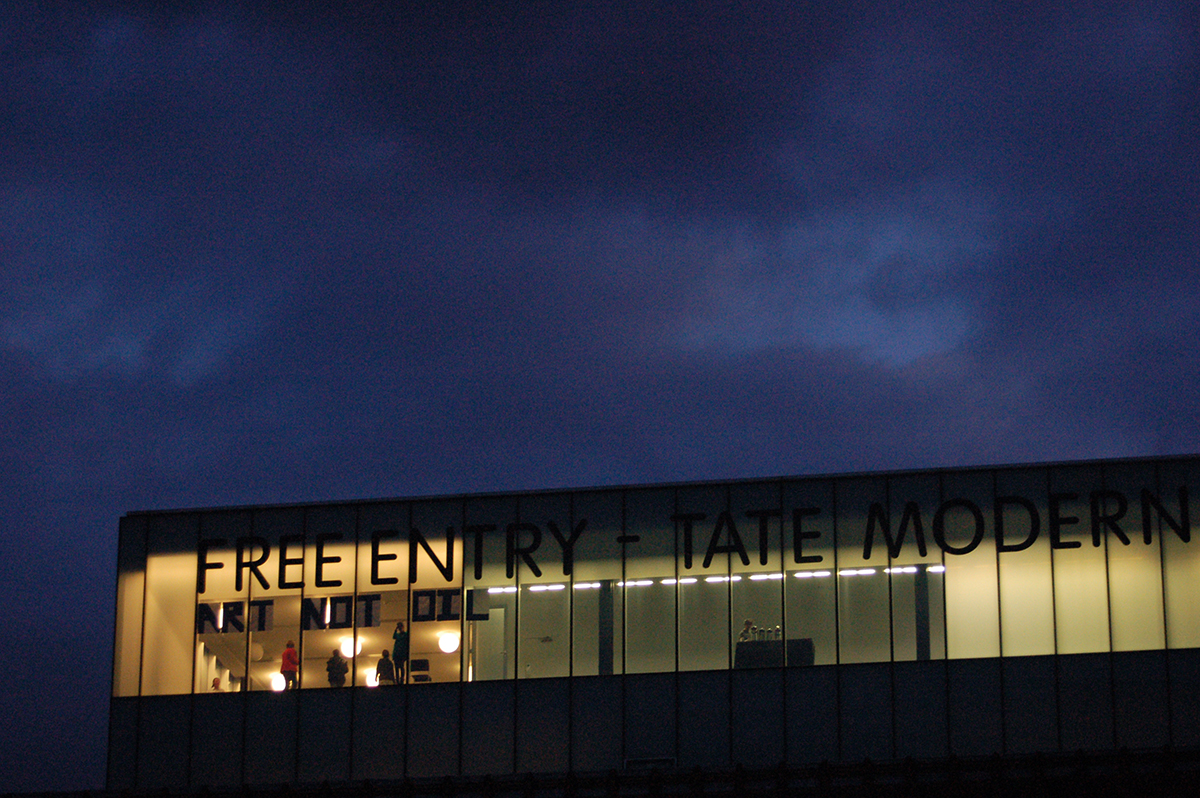 Liberate Tate is a network dedicated to taking creative disobedience against Tate until it drops its oil company funding. The network was founded during a workshop in January 2010 on art and activism, commissioned by Tate. When Tate curators tried to censor the workshop from making interventions against Tate sponsors, even though none had been planned, the incensed participants decided to continue their work together beyond the workshop and set up Liberate Tate.

Happy Birthday. We wish we could celebrate with you. But we can’t.

As we write, your corporate sponsor BP is creating the largest oil painting in the world, inspired by profit margins and a culture that puts money in front of life, its shadowy stain shimmers across the Gulf of Mexico. A toxic tide that turns thriving ecosystems into deserts and deprives cultures of their way of life, it is one of the world’s greatest works of corporate art, a work that reeks of death and speaks of our society’s failure of imagination.

Every day Tate scrubs clean BP’s public image with the detergent of cool progressive culture. But there is nothing innovative or cutting edge about a company that knowingly feeds our addiction to fossil fuels despite a climate crisis, a company whose greed has killed twenty-one employees in just over a year, a company that continues to invest in the cancer-causing climate crimes of tar sands in Alberta, Canada.

By placing the words BP and Art together, the destructive and obsolete nature of the fossil fuel industry is masked, and crimes against the future are given a slick and stainless sheen.

Every time we step inside the museum Tate makes us complicit with these acts, acts that will one day seem as archaic as the slave trade, as anachronistic as public executions Every time Nicholas Serota is asked how a museum that prides itself on dealing with climate change can be funded by an oil company he responds that there are no plans to abandon BP sponsorship (anything to do with having an ex-CEO of BP chair Tate’s board of trustees?).

When art activist group The Laboratory of Insurrectionary Imagination were invited to run a workshop on art and civil disobedience, they were told by curators that they could not take any action against Tate and its sponsors and the workshop was policed by the curators to make sure the artists produced work “commensurate with the Tate’s mission”. In March 2010, Tate Modern ran an eco symposium, “Rising to the Climate Change Challenge: Artists and Scientists Imagine Tomorrow’s World”, on the same day that Tate Britain was celebrating twenty years of BP sponsorship with one of its ‘BP Saturdays’ Incensed by this censorship and hypocrisy, participants in the symposium called for a vote: 80% of the audience agreed that BP sponsorship should be dropped by 2012.

So today we offer you a birthday present, a gift to liberate Tate from its old-fashioned fossil fuel addiction – a gift for the future. Beginning during your 10th anniversary party and continuing until you drop the sponsorship deal, we will be commissioning a series of art interventions in Tate buildings across the country. Already commissioned are Art Action collective, with a birthday surprise at this weekend’s No Soul For Sale event, and The Invisible Committee, who will infiltrate every corner of Tate across the country in the coming months.

We invite artists to join us and act to liberate Tate. Free art from oil.