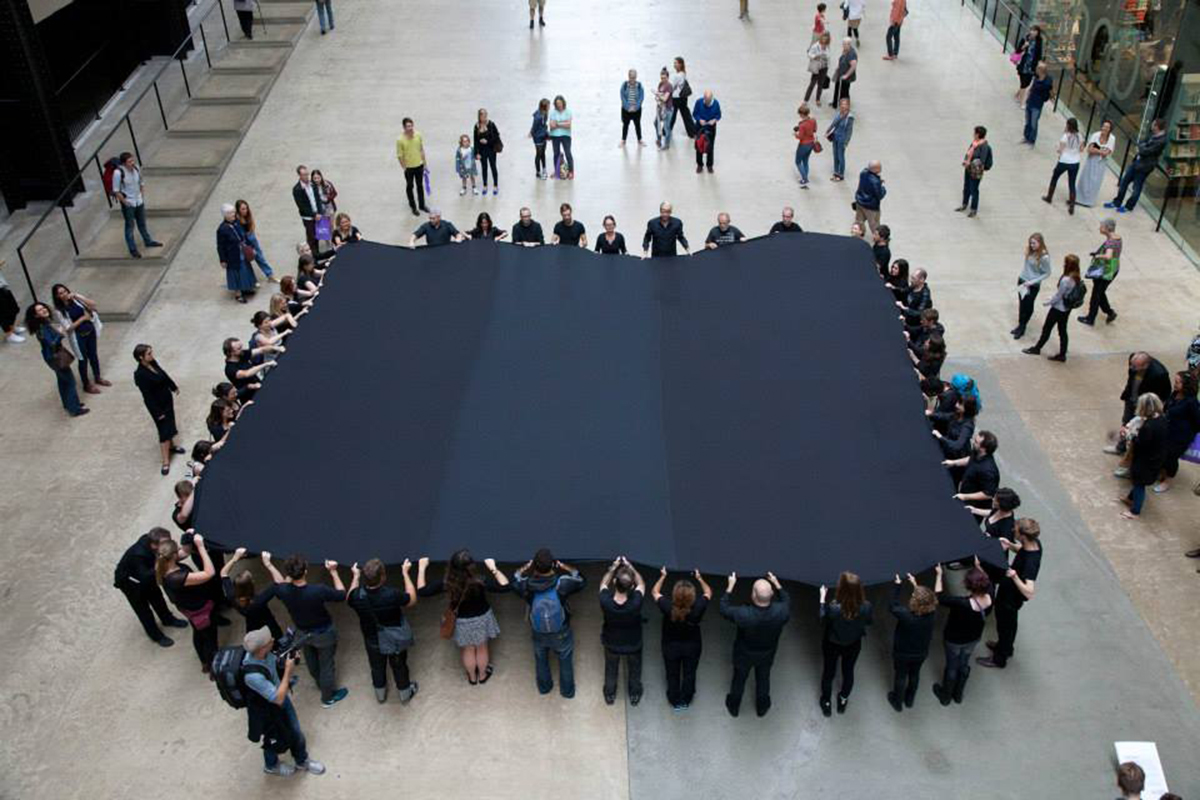 Liberate Tate’s ‘Hidden Figures’ was a dramatic reference to Tate’s refusal to disclose information about its controversial sponsorship relationship with BP. In April 2014, the UK’s Information Commissioner ruled that Tate was breaking information law by refusing to remove a series of black squares covering information about the sponsorship deal in meeting minutes of Tate’s Ethics Committee and Board of Trustees. The painting ‘Black Square’ by Kazimir Malevich is currently on display as part of the Malevich exhibition at Tate Modern.

The Liberate Tate performance started at 1pm when a 64 square metre black cloth was unfurled having been smuggled into Tate Modern. The hundred performers gathered around the edges of the giant Black Square and in unison raised the material up into the air. Individual performers then took turns to enter underneath the material making a series of shapes and poses while the material settled on top of them.

An interpretation panel close to the performance included the text:

‘Hidden Figures’ ended after two hours with all the performers lying underneath Liberate Tate’s Black Square. After 15 minutes of lying in silence underneath, the cloth was slowly pulled off by two figures who then proceeded to calmly trail the Black Square up the slope of the Turbine Hall and through the exit.

The performance took place just days away from Tate appearing before the Information Tribunal on 18 September to appeal the ruling that it must remove redactions from its governing body minutes and just days after a US federal judge ruling BP guilty of gross negligence in 2010’s Deepwater Horizon disaster.

Campaigners have argued that Tate needs to disclose how much money they are getting from BP so that an informed public debate can take place as to whether the sum of money is irreplaceable. Earlier this year an infographic was released that said on the information that was currently available, BP’s sponsorship money represented less than half a percent of Tate’s total budget.

“There’s an important debate taking place about whether we let oil companies get away with pretending to be good corporate citizens by sponsoring cultural institutions. Tate is preventing that debate from taking place by illegally using black squares of redaction to cover up important information. More than 100 people came to Tate Modern to perform ‘Hidden Figures’ to tell Tate that as a public body it needs to be more transparent about its operations and to respond to public pressure over BP sponsorship.”

Photos and footage from the performance will be made available.

Notes
Tate’s relationship with BP has been the subject of petitions, artists writing letters to newspapers, Tate Members resigning during the annual Members AGM and a series of protests and performances.
In 2014 Platform released the infographic that showed how BP’s £10 million sponsorship money announced at the end of 2010 would look spread out evenly over 5 years and four institutions. The money for Tate represented less than 0.5% of it’s total annual budget in 2013. See .
The Information Tribunal Hearing over Tate and BP sponsorship will take place on 18September, 10am at Court 7, Field House, 15 Bream’s Buildings, London, EC4A 1DZ
The challenge over Tate’s refuse to disclose information is being brought by Request Initiative, acting on behalf of Platform.

The March 2014 ruling from the Information Commissioner is available here.

Commentary on the ruling: Time for Tate to stop being so shady over BP sponsorship

Since 2010 Liberate Tate has been carrying out a series of unsolicited performances inside Tate galleries aimed at disrupting the sponsorship relationship between BP and Tate. The performances, which have garnered headlines internationally, have included:

‘Parts Per Million’: 50 people dressed in black with veils performed rising carbon levels using the chronology of the ‘BP Walk through British Art’ in Tate Britain (November 2013).
‘The Gift’: a 16.5 metre, 1.5 tonne wind turbine blade installed in Tate Modern’s Turbine Hall in an unofficial performance involving over 100 members of Liberate Tate (July 2012).
‘Human Cost’: a performance in Tate Britain on the anniversary of the Deepwater Horizon explosion (April 2011) when a naked member of the group had an oil-like substance poured over them on the floor in an exhibition that was part of ‘BP British Art Displays’.
‘License to spill’: an oil spill at the Tate Summer Party ‘celebrating 20 years of BP support’ (June 2010).
‘Dead in the water’: a contribution to Tate Modern 10th Birthday celebrations (May 2010) by hanging dead fish and birds from giant black helium balloons in the Turbine Hall.